I was naked: no money, no cellphone, no Benedetta, no sangha. There I was again, detached from it all. I had no lover in bed, no children to send to school, my kitchen was empty of any perishables while being on the road, no work to go to, no plants to water. I had a fat, smiling monk ready to pierce my flesh a hundred thousand times with a sharp steel needle that had not been sterilized, with an ink of his own making that included serpent’s poison together with a mix of herbs. A tattoo that he would pick in the part of my body that he deemed appropriate. I had no say in the affair. Not quite what my mother expected. Would I ever be able to find my way back into the legion that was at that moment sleeping in Buenos Aires? Maybe I had been cut out forever. Maybe I was awake for a reason larger than a lover in bed and morning coffee. Maybe it was just the flashback. Two years, ten months, and fourteen days.

The wiry guy indicated with polite gestures that I should go next. I was, as always in Buddhist temples, in awe of the presence of the monk, a big, fat one, smiling lovingly, all visible skin covered in magical tattoos. The wiry guy would stand by me during the tattoo ceremony and provide the needed help. Everybody was happy. In this very surreal chapter of my life, a figment of self-preservation made me notice that nobody had washed their hands. I yielded to the experience and decided to neglect the bacterial concern.

"Ajarn," I said, kneeling respectfully in front of the monk but talking to his assistant, who knew a little English. “Can I ask which sak yant? And where?” I was not totally out of control. Before the fat monk started inking my body, I wanted to know what type of tattoo he was about to give me and in which part of the body. Sak yant tattoos are truly beautiful, but I wanted to have a modicum of information before he tattooed, for example, a soaring Garuda across my forehead.

“Rishi. Chest,” the Ajarn said gravely, without need for translation. The monk knew that I would not dare contradict him. Besides, I had no money left, no cellphone to call Pak, and the driver waiting outside the temple would not make a strong ally in case I decided to flee. I knew the Rishi tattoo: the hermit, the sage, the shaman. This was the holy sak yant tattoo that granted the protection of the wisest teachers and entailed the highest moral commitments from the tattoo bearer. I could not have Rishi. I was not ready to sustain such moral commitments. I was going to fuck up on one of the most sacred spiritual vows I could ever take. I had wondered whether there would be a time in my life when I would feel ready for Rishi, but it was not that day. No matter how honest a part of me was about living a life in recovery, another part of me was freaking out. Had the previous night been the last crazy night in my life?

“No Rishi, Ajarn, I’m not ready yet.” I placed my palms together, touched my forehead with my thumbs, and prostrated even deeper. “No Rishi, Ajarn. Please,” I mumbled again, my lips brushing the fake Persian carpet. The monk chuckled, grabbed me by an arm, and looked into my eyes. “Now relax,” was all he said.

The Ajarn's assistant and the Muay Thai fighter helped me out of my t-shirt and stretched me on a futon on the floor. They placed the palms of their hands over the sides of my chest, creating a canvas where the monk would start his work. Their humid hands gave me a warm sensation of love and a faint cellular memory of tribal life. From the floor perspective I could see towering Buddhas, golden Garudas, plastic flowers, and a rotating fan that reminded me a pizza joint in the neighborhood where I grew up. The monk then stabbed me in the chest, and he stabbed me again and again with the merciless inked needle at the speed of a sewing machine. 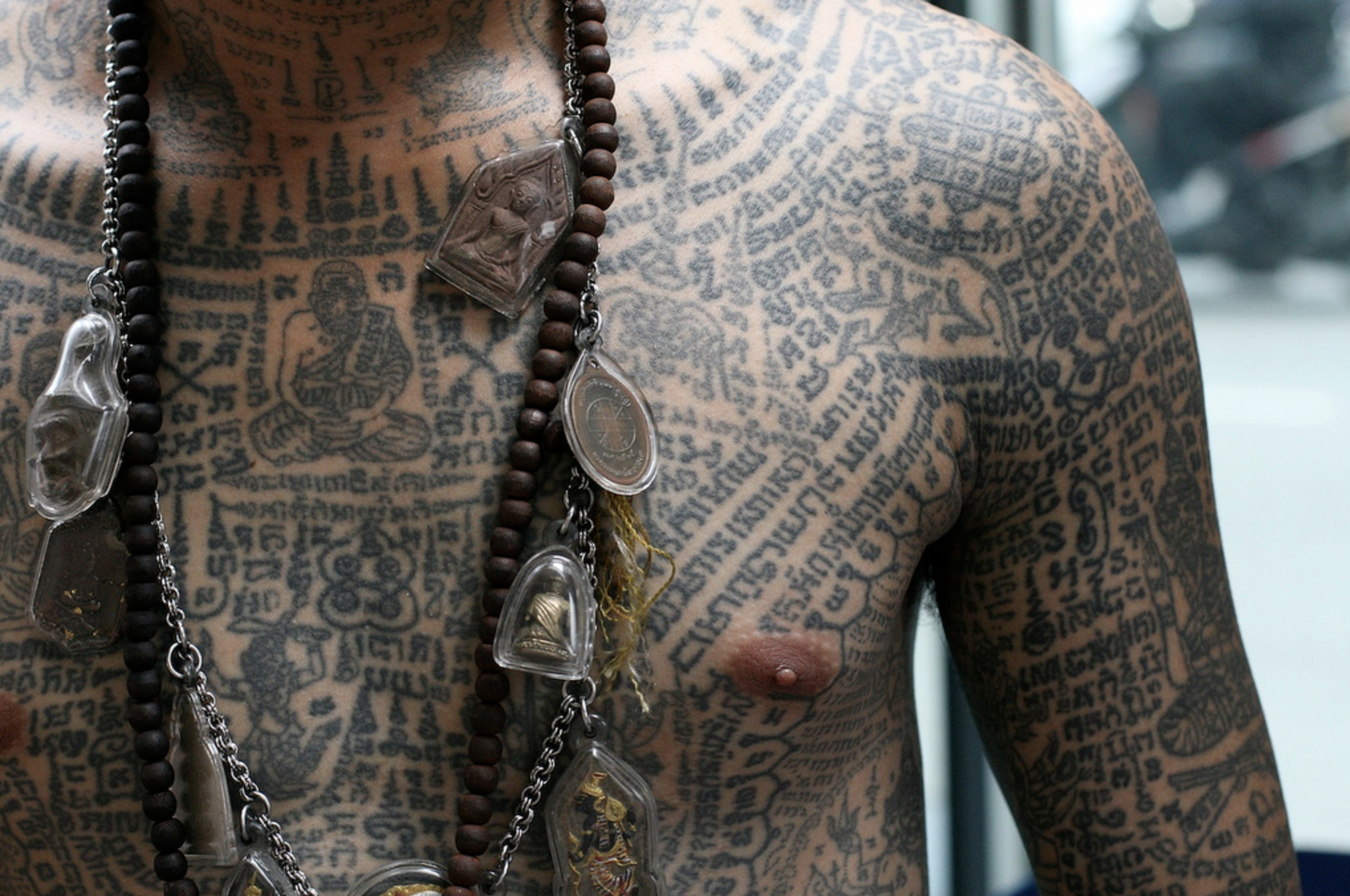