In May 2018, I met my friend Miguel Kunz in Lima to shoot the promotional videos for the novel Shaman Express. I had just come back from my fourth trip to Yarinacocha, and I was writing enthusiastically about my time there. We sat at a café to work on the scripts and discussed shamanism, trees, ayahuasca, and urban malaise.

This fact, together with the fact that Miguel is a handsome gringo, prompted the American girls sitting next to us to share the shamanic wisdom bestowed on them during a six-day, four-ayahuasca-ceremony tour in the jungle, facilitated in English by a white European, though a real shaman popped up at night. "Young people from the cities come looking for the journey (la mareación), but it has no effect on them. They go back just like they came," José told me one morning in Yarina. The journey (la mareación) refers to the trance induced by drinking ayahuasca. "They need to bring some order to the negative energies to which they are exposed in large cities. But once their ayahuasca ceremony is over, the following day they go back to the disorder of their lives."

The stream of travelers coming from the cities and their money have modified the ancestral traditions in this part of the jungle. Together with the globalization of ayahuasca ceremonies, there appeared excursions tailor-made to urban needs. To this it must be added that the aboriginal shamans from this area that had an intact communication with the plant spirits have grown old. Their new apprentices are white men and women whose relationship with ayahuasca is diluted by the mere fact of not being indigenous. Avoiding the first ring of charlatans has become increasingly difficult.

José is a first-hand witness to the indigenous ayahuasca ceremonies. "In the jungle, I have been with the Shipibo, Yaminahua, Asháninka, Amahuaca y Piro, with all of them." He regrets seeing how the purity of tradition has been tarnished by the search for profit. "I am not judgmental. This is how it is. Sometimes the indigenous people look for profit. Ayahuasca can show you many different things, but you will not know what to do. It does not make you feel strong. For people that only need cleansing, ayahuasca is enough. But it does not make you feel strong; it may be with you today and then not tomorrow."

This, added to the recommendation to avoid shamans that advertise themselves through social media, makes finding a shaman very difficult for those that have the money but not the time to come to the forest and sit until the shaman appears. And then it is necessary to make subsequent visits to the shaman to strengthen the relationship. One must have the karma to find a teacher, but then one has to create the karma to follow the teacher.

Let's go back to my first morning in Yarina. After breakfast I enquired about how to reach Pucallpa, because I needed to run some errands. That is how I met Miguel, who drove me in his motocar, a kind of cart tied to a motorcycle like the rickshaws in India. He showed me around Pucallpa, we drank coffee pasado, and we roamed the market where essential goods for the shamanic practices are sold, such as mapacho tobacco, coca leaves, or copal for smudging. Back in Yarina he asked me casually, "Are you here because of the medicine?” I defensively replied, "Yes, but not ayahuasca." He explained that his father was a forest shaman and had spent several years in the jungle. The previous day he had returned to Yarina because he had a dream of foreigners that needed him. Once recovered from the surprise of the coincidence with the dream that I had, Miguel explained that the tree-medicine did not induce a trance like ayahuasca does. "When can I see him?" I asked. "Tomorrow at 5:00 a.m. He wakes up early.”

It was a blessing, or a stroke of luck: “Most of the paleros have passed away. The cycle and time of their lives is over. The young people are not interested in learning. The elders do not teach their offspring any more. Young people waste their lives in vanity. There are few forest-shamans, much fewer than ayahuasca-shamans," José explained to me in the subsequent dietas I made with him.

That same evening I met the other guests of the bungalows in Yarina, Leo and Sana, Russian shamanic practitioners. They had spent the last seven years learning about the Shipibo-Konibo traditions, they spoke correct Spanish, and had settled permanently in Yarina for the last two years. With love and patience, they showed me this side of the world, which has rules alien to the logic of Western thought, and tried to bring some order to my ideas and aims about the indigenous knowledge. During our meals in Yarina, besieged by mosquitoes, I received a generous amount of the knowledge they have amassed along the years of their journey and the spiritual practices that led them to shamanism, especially Sufism; on top of lessons in physics, biology, neurosciences, and history. José brought nature and its medicine, while Leo and Sana contributed a theoretical framework and their love.

Along successive ayahuasca ceremonies, Leo and Sana had received information about looking for a maestro palero to assist in the healing of an ill person close to them. With no forest shaman at sight, they started to meditate, hoping that one would manifest himself. After two months, José received the call to come and work with the foreigners that needed him. Michael Harner explains that in shamanic work, it is important to be on the lookout for the occurrence of positive synchronicities, for they are signals that power is working to produce effects far beyond the normal bounds of probability.

The following morning I met José Gama, the forest-shaman of Ucayali. He was a dynamic man, serene, sinewy, with good posture. He spoke just the necessary words. He asked the forest-spirits for a prognosis to determine a dieta. He made a reading, taking me by the wrists, and then placed his palms on my head. "You cannot help anyone before you recover your strength," he concluded. "We need to nourish your bones," he then said, without any possibility of him knowing that I had had cancer and that my femur had broken twice as a consequence of radiotherapy. He suggested a dieta of a certain tree, that he would cook. He explained very briefly about its benefits and the fasting regime that I would have to observe. "The tree-dieta takes six to eight days. Or whatever the tree-spirit shows to the shaman about the patient’s needs. Then you have to fast for a month. That is why this medicine does not bring disorder, because it is what the tree-spirit tells to the forest-shaman." 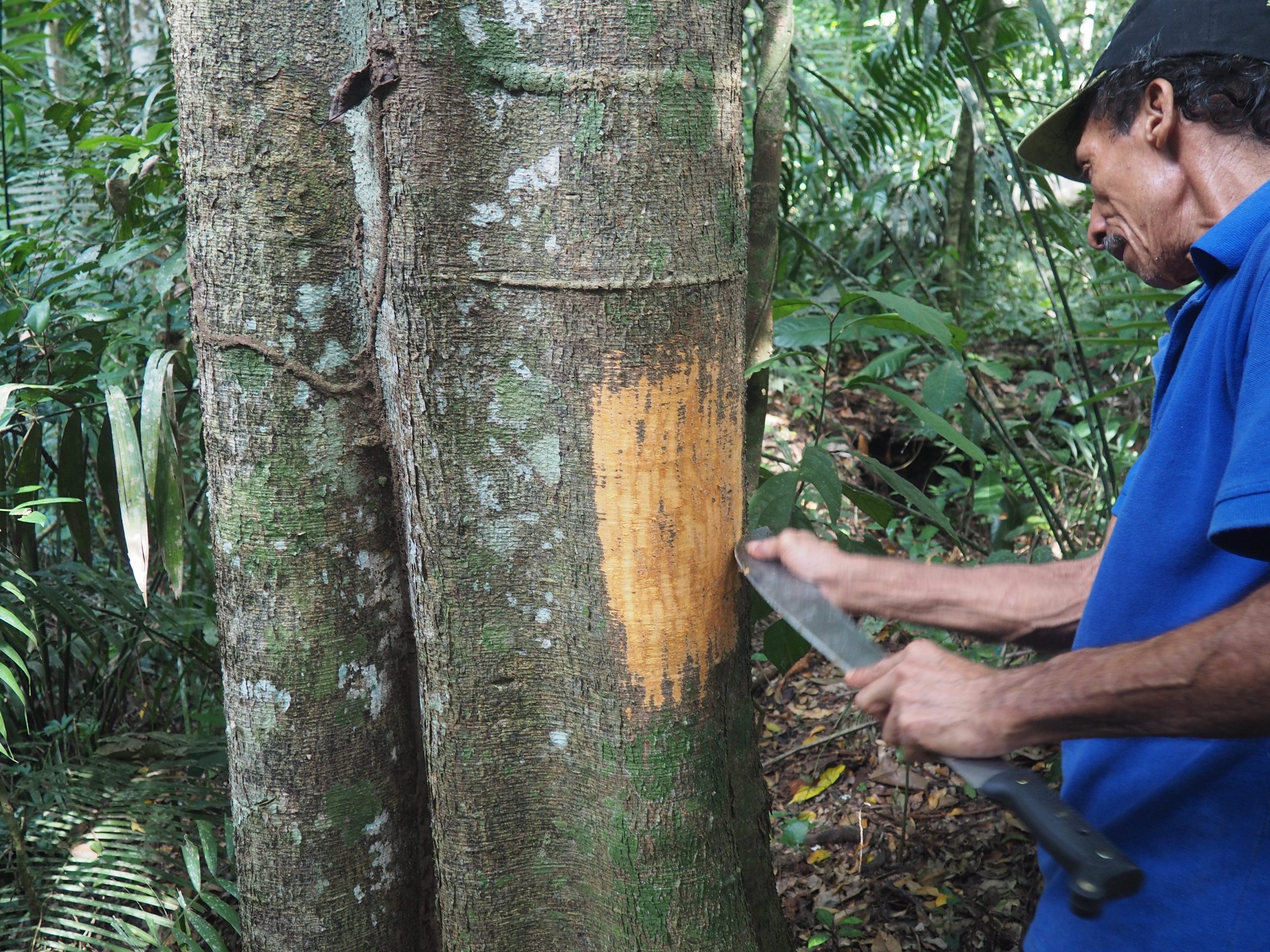 "I gave you science and wisdom, and what have you made of it? All work and no joy"

"You can't even imagine all that you will learn."