Magical tattoos, or yant as they are referred to in Southeast Asia, have been an identifying trademark of Muay Thai boxers, outlaws, sex workers, and other adventurous dwellers of the marginal world for most of the 20th century. More recently, yant tattoos have made their way onto the skin of the urban, young upper-middle classes. The fashionable vibe sprang from Cambodia, Myanmar, Laos, and Thailand to distant shores, all the way to Hollywood. Yants offer a fascinating blend of mystical designs and magical qualities while retaining a certain ambiguity as to their purpose. If you have a yant, are you on your way to monkhood or are you part of a lawless gang?

In fact, yants are a feature of animist and shamanic practices in Southeast Asia that predate Buddhism by several thousand years. Just like anywhere else in the world, the various indigenous groups that lived in this part of the world from time immemorial had the primal need to ask the Spirits for protection, guidance, divination, and essential attributes to safely navigate their daily affairs. This encompassed longevity and good health, fortune in love and in business, peaceful living conditions, and, in absence of the latter, fearlessness in combat and an eventual swift passage into the Spirit realm.

Shamans provided spiritual answers to all these needs. On occasion, the shamans invoked a certain archetypical force of protection that was magically insufflated into the person seeking assistance, resulting in the figures of the tigers, lions, deer, turtles, lizards, and many other animals that represent such forces and constitute what in shamanic traditions are commonly known as Power Animals. The ceremonial way to achieve this was by the chanting of a magical spell that caused the qualities of the animals to be incorporated into the person seeking protection. In the fertile and auspicious crosspollination of shamanic and religious wisdom that took place in Southeast Asia, the solutions to these spiritual needs gave birth to a rich body of magical animals, diagrams, sacred geometry, deities, and mantras in ancient Pali, Khom, Lanna, and other languages and dialects.

But before the yant, there were the amulets. A pilgrim would come to the village shaman asking for an uneventful journey on the eve of a long caravan march. The shaman would smudge, recite, chant, and instill the necessary magic. On occasion, the shaman would provide a clay image imbued with magical qualities to keep the pilgrim company along the journey. These amulets could also be a piece of cloth inscribed with sacred words and images as a constant reminder that the bearer was protected by the Spirits. Clay amulets were worn in necklaces or tied around the wrists, while cloth amulets were carried in pockets or stitched to clothes.

Occasionally, the precious amulets were lost in combat and during journeys, or stolen from the alcove of a courtesan. It is reasonable to believe that it was primarily for this reason that the shamans came up with an indelible solution: tattoos. For thousands of years the shamans of Southeast Asia perfected the art of tattooing the amulets into the skin of those seeking protection. An elaborate code of texts, prayers, mantras, and secondary designs attached to the main images were then created. With the advent of Buddhism in Southeast Asia, local and preexisting shamanic practices were integrated into the new teachings. Buddhist monks in general accept the practice of yant, even if the tradition is not part of their particular school of thought. Some monks learned the art of hand poking, and shortly thereafter, new yants were added to the original collection to reflect the various manifestations of Buddha. This makes perfect sense, because the representation of Buddha, just like the images of hermits and other holy men and women that came before him, is a permanent inspiration to liberate us from suffering.

The monk that has learned the art of the yant is called an ajarn. The ceremony of tattooing the yant generally takes place in a temple-like structure known as the samnak. Altars, Hindu effigies, Buddhas, amulets, intricate geometrical figures, images of shamans and other spiritual masters, together with bamboo and steel needles essential to the sacred practice, surround the ajarn that presides over the room, sitting on colorful cushions. 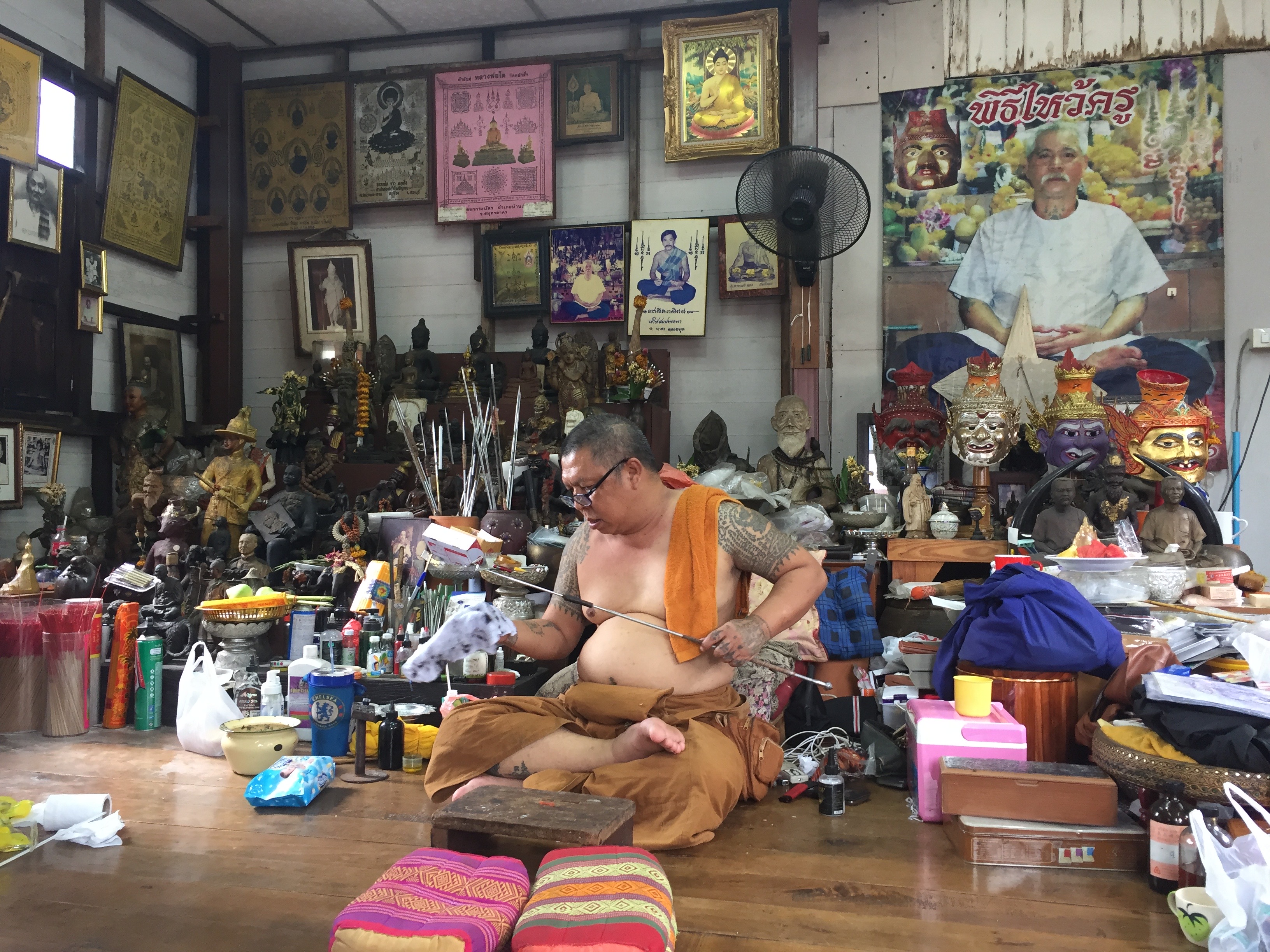 The samnak could be the equivalent of a favorite café in a Western town, a place to gather and chat about thoughts, hopes, and fears. The ajarn is available starting in the early afternoon. Some of his assistants come and go, running errands inherent to the sacred practice, while men and women arrive during the day, sit, and wait for their turn to be tattooed. They may bring almond milk, bananas, and cans of cold Nescafé that they share. Children coming back from school storm into the samnak, weaving into their earliest memories the experience of the savvy businesswoman who asked for a tattoo that brings abundance, a policeman who asks for a magical tiger that will make him fearless, or the moto-taxi driver who wants a turtle yant for longevity.

The ceremony has not changed much through the centuries: the person requesting protection comes to the shaman with an offering of flowers, incense, and candles. After a brief discussion, the shaman recommends a certain yant that is then hand-poked. No machines are used to tattoo a yant; they are engraved into the skin with a long metal spike or bamboo sharpened to a point. There are several long metal spikes of various sizes and qualities to be used by the ajarn, depending on the characteristics of the tattoo.

To the untrained Western eye, the hygienic conditions at the samnak could be a cause for concern. The general practice is that upon finishing one tattoo, the needle or metal spike is wiped with tissue paper and then put to rest in a vase with a cleaning solution, together with other utensils, next to the ajarn's seat. When it is time to tattoo the next person, the ajarn chooses the adequate spike from various ones in the vase, wipes it again with tissue paper, and starts his work. The concept of using new needles is alien to the millenary practice of yant. It goes without saying that latex gloves are not to be found at the samnak.

Ink is another important topic. Some people may not be free to sport tattoos due to their social background or job etiquette. The formidable ajarns have a solution for the honest believer that seeks yant protection in spite of the constraint: during the ceremony the ink is replaced by oil, thus rendering the tattoo invisible to the human eye.

Most ajarns use commercial tattoo ink that they may mix with herbal tinctures to enhance the magical qualities, and occasionally other substances, like drops of serpent's poison. It is highly unlikely that different people will be tattooed using ink directly from the same bottle. The common situation is that the ajarn pours some of the ink from the bottle with additional magical substances into a smaller container to be used during the session with that particular person. Once the ceremony is over, any remaining ink is discarded and not shared with anybody else. There is profound mystical meaning in the practice of sharing yants. Coming together to the samnak with friends or relatives to get yants on the same day with ink from the same bottle creates a magical bond of loyalty and kinship that is referred to as having become ink brothers. It is an initiatory rite and gives a sense of spiritual belonging that runs deep. 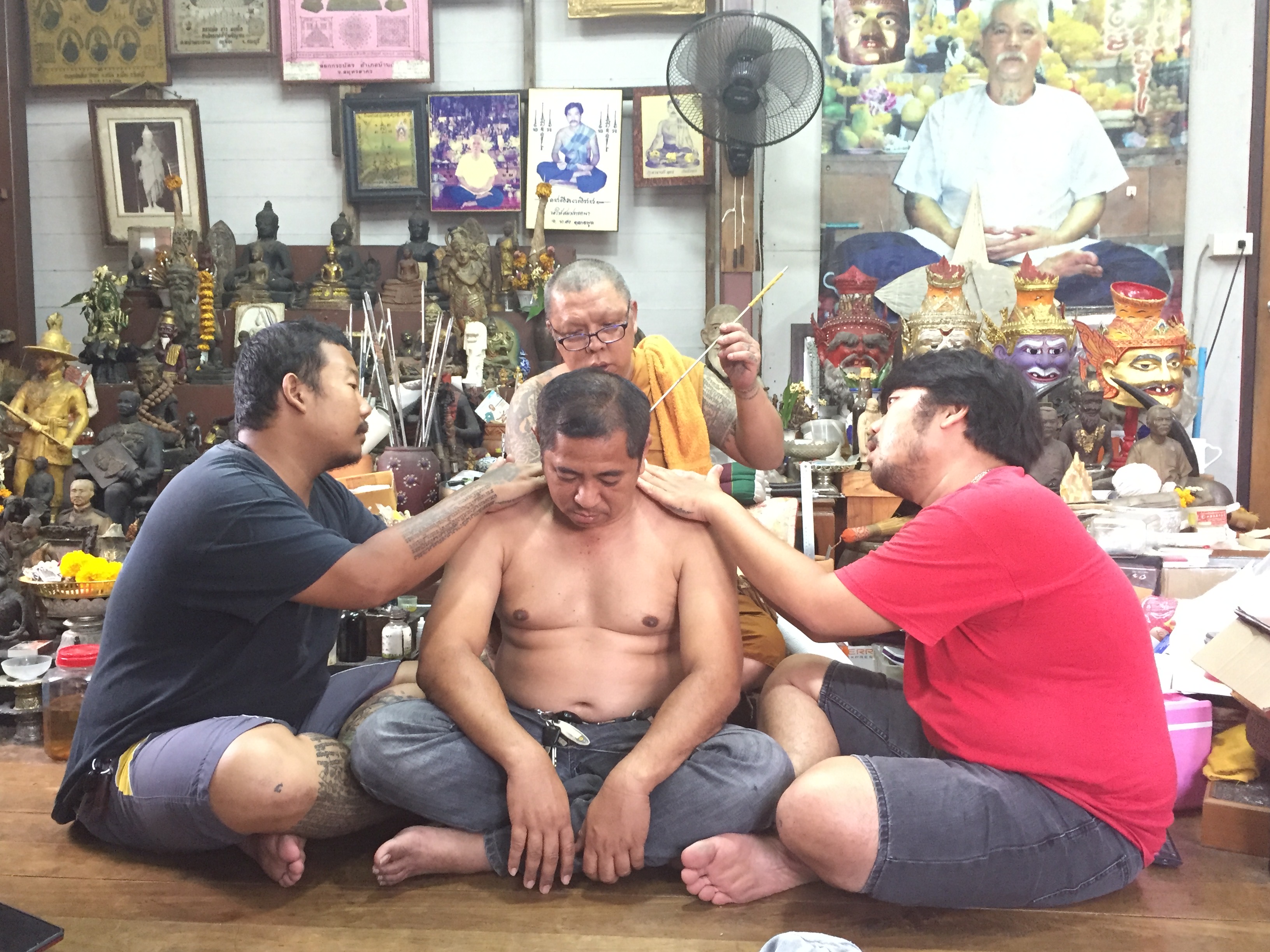 The increasing interest of foreigners in getting yants brought the bacteriological concern to the table. The predominant spiritual attitude across Southeast Asia is a morality of nonviolence, which translates to avoidance of retaliation or argument. Thus, it is accepted that foreigners can receive yants in any fashion they prefer. Commercial tattoo studios in Bangkok or Phnom Penh offer a menu ranging from getting a yant by a qualified tattoo artist using a machine or a metal spike, gloves, new needles, and fresh ink, all in a pristine room with A/C, to escorting the client to an upmarket samnak to be tattooed by a legitimate ajarn, most likely without latex gloves and using old needles, but with fresh commercial ink. At the top of the list, or at the bottom, depending on how you view it, at least one five-star hotel in Bangkok offers a tattoo session with a real ajarn at the celebrated hotel spa, with state-of-the-art sanitary conditions, latex gloves included.

Truth be told, most foreigners with hygienic concerns coming to ajarns through city tattoo agents tend to forget their fears when confronted with this millenary tradition and plug in to the trance created by the heat, smells, noises, chanting, and the needle burning the skin. The spiritual condition generates awareness and a sense of place that overrides all fears, real or imaginary.

Traditionally, the remuneration for the ceremony consists in an offer of incense, flowers, and candles for the village samnak. It is customary, but not mandatory, to leave a monetary donation in a tin or box kept by the assistants of the ajarn, guaranteeing the anonymity of the amount left by each donor. At the other end of the market, prices are fixed and major credit cards are accepted.

A relevant aspect of yant culture is the conditions for the magical protection to remain effective. The person seeking the magical qualities must make the journey to the samnak, receive a spiritual prognosis from the ajarn, offer a donation, and endure the tattooing procedure. In addition to that, the receiver of the yant will have to observe moral principles, the equivalents of a vow, for the magical protection to become effective and lasting. The general rule is to adhere to the Noble Eightfold Path taught by Buddha, which includes the ethical elements of right speech, right action, and right livelihood. Depending on particular circumstances, the ajarn may request from the tattoo bearer to observe a certain period a celibacy and meditation, follow a vegetarian diet, and abstain from alcohol and other intoxicating drugs. Should the vows not be respected, there will not be retaliation from the Spiritual realm. However, the yant will loose its magical protective qualities and become a mere decorative item.

Whatever our reasons for approaching this fascinating tradition, yants we bear are a constant reminder that at one moment of our lives we asked for spiritual protection in order to become a better version of ourselves. Achieving an impeccable code of conduct is a challenge that may take many lifetimes. When we fail to keep our vows, we are provided with the opportunity to learn from our weakness. Our practice may then become stronger. In the eternal cycle of life, each turn of the wheel is a confirmation of cosmic order. The samnak is always open to those honestly seeking a new round.

Special thanks to my ink brother Karo Iyash for generously sharing his knowledge and serenity.

In the cover photo: Rojjanin "Edward" Thanakiatrungrawee, Karo Iyash and Mudit Suebsukchareon at the samnak of ajarn Luang Por Heng in Thonburi, Thailand 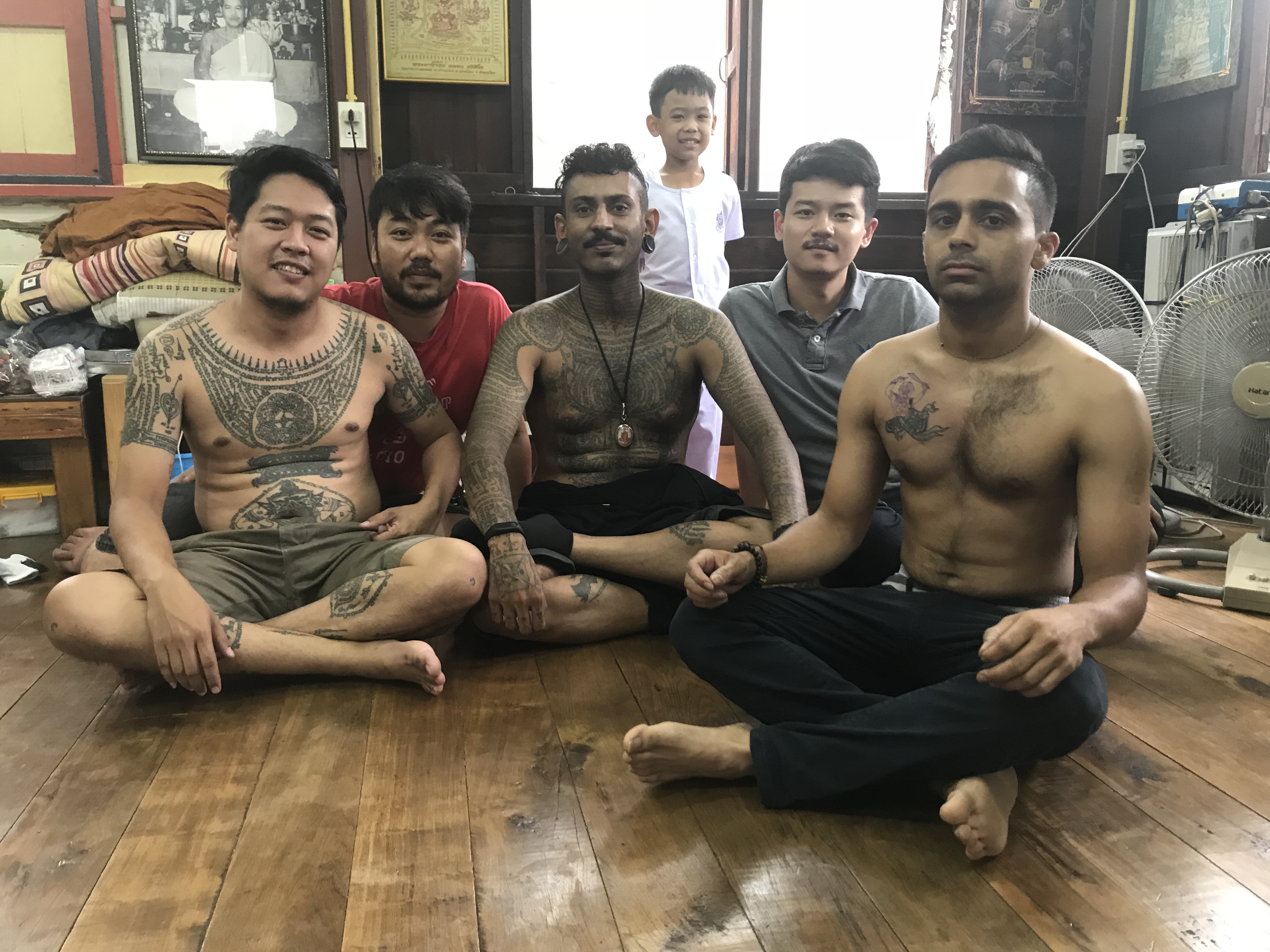 —
The Shaman-Tattooers of Southeast Asia
Comparte